There is a pulse after all. I’m dusting off the blog, and just finished restoring all the photos in the archives. I know there’s still a ton of broken links, but I’ll get to them one of these days. This weekend I’m fighting off a cold, and doing mindless stuff like this makes me feel less sick, I guess. Getting all the old photos back was a fun trip down memory lane to the early days — back when self-publishing was more fun and nobody called these website thingies “blogs.” 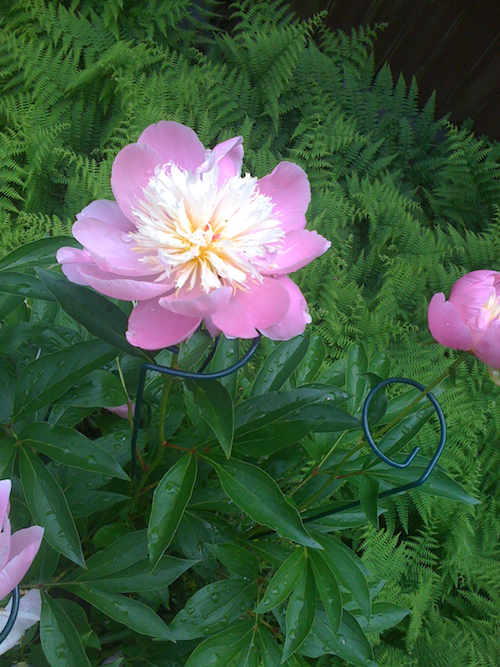 Last year we planted an ornamental onion and two peonies in a raised planter smack in the middle of our ferns. The onion bloomed last year, but the peonies did not. This year, reverse that by two-thirds. The onion is gone, and one of the two peonies sent up around 8 flowers. Also added to Flickr photostream is this panorama of Central Park that I took from the roof garden at the Met. I used the Panorama app on my iPhone, and the phone literally became warm while it was processing this one, but it did a fantastic job. Click for BIG full-sized version. This was all the Panorama app – I did no post-processing.

The 2008 season was great for both of my football passions — the Steelers won the Super Bowl, and my fantasy team won the Fantasy Bowl.  And as defending champs, both passions shared the same fate for the 2009 season which ended Sunday night — missed the playoffs.

My fantasy team was out after week 14, finishing with a 7-7 record despite having (at the time) the 3rd highest points in the league. I finished with the 4th highest points in the league and will get an award for top points of non-playoff teams. Matt Forte and Greg Jennings were big disappointments this year, and the rest of my stud players (Tom Brady, MoJo Drew, Roddy White, Derrick Mason) were all wildly inconsistent.

As for the Steelers, this was not a surprise. They won Sunday but didn’t get the help from other teams that they needed. Their special teams were atrocious for big sections of the year, and you can’t lose 5 in a row (including a pair of 27-24 embarrassments to Oakland and Kansas City) and expect to get the chance to defend your title.

The NFL playoffs have lost a lot of my interest. And with Wes Welker’s season-ending injury, I’ll be surprised to see the Patriots go far. Time to focus on the Penguins and look forward to spring training.

Brad Graham was an inspiration to me, as I’m sure he was to many bloggers who’ve been around for the long haul. He’s been on my bookmarks list forever, even though he hasn’t written regularly on his blog in a few years (I know the feeling). It’s a real shock to learn of Brad’s death that was reported today. His Facebook page, which he last updated New Year’s Eve, is now an outpouring of love, remembrances, and the grief of his friends.

Just a few days ago, I retweeted one his Twitter posts. It was just a quick yet clever observation that showed his abundant wit: “iSlate = is late.” It’s pretty damn funny if you’re a Mac fanboy (as Brad was), and I thought it was another of those “perfect Brad” tweets. Unfortunately, it was also one of his last.

For many years, Brad’s blog was always THE FIRST STOP on April Fools Days when you fired up your web browser, and he never failed to deliver a temporary re-branding that left the reader in stitches. We won’t get to break bread with Brad ever again, but going forward I’ll have a nip and a toast every April 1st to remember TheBrad.